We worked with homelessness charity Hogar Sí (formerly RAIS Fundación) from 2017 to 2020. They now continue to work with a national focus, advocating for policy change to end street homelessness in Spain for good.

What did the campaign achieve? Alicante held a Connections Week in November 2017, when almost 200 volunteers found 195 people sleeping on the streets. One volunteer shared his experience of being confronted with the reality of homelessness in this article (in Spanish). 111 people experiencing homelessness were interviewed and results were stark – more than two-in-three (70 per cent) of people said they engaged in no activities other than simply surviving. Find out more by reading a reflection of the week and the full results.

Following this, Hogar Sí developed their Housing First programme, Habitat. So far, the programme has supported over 360 people into secure accommodation in 22 different municipalities across Spain, including Alicante. Their work focuses on listening to the needs of people experiencing homelessness and supporting them into the homes which are right for them. In this video, Mario, Libia, Josep, Ramón, Slavey and Pepe explain how Housing First has helped them.

In 2019 Hogar Sí focused on advocacy. Their proposals to end homelessness in Spain were published to coincide with local, regional, national and European elections, to get homelessness on the political agenda. They also met with the Spanish Prime Minister, Pedro Sánchez, to secure his commitment and influence national homelessness initiatives. 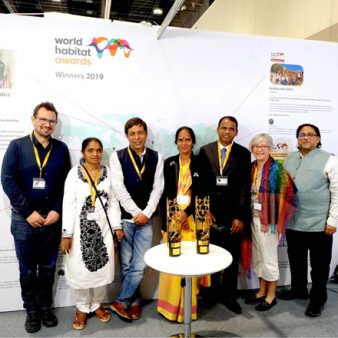