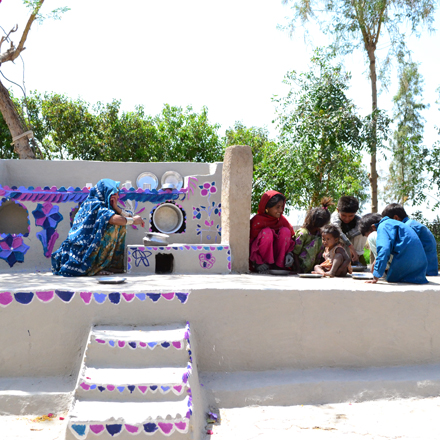 A programme to build low-cost smokeless stoves, helping to improve women’s health and alleviate poverty in rural Pakistan, has been named a World Habitat Award Winner 2018.

Pakistan Chulahs – The smokeless stoves empowering women and changing lives teaches marginalised women to build a hygienic, sustainable, smokeless earthen stove, which not only improves their health but also empowers them to earn a living by marketing and building stoves in other villages.

The programme is run by the Heritage Foundation of Pakistan, which has trained 35 ‘Barefoot Village Entrepreneurs’ (BVEs) in Chulah construction. BVEs act as master trainers, charging US$2 to teach other women to build their own Chulahs out of mud bricks and lime. Materials cost an additional US$6, bringing the total cost to US$8.

Chulah stoves use 50-70 per cent less firewood than traditional stoves, reducing deforestation and saving valuable time for women, whose job it is to collect fuel. Smoke from traditional open-flame wood-burning stoves can cause serious respiratory infections and eye problems. In addition, food cooked on these floor-mounted stoves is easily contaminated leading to diarrhoea, especially in children.

Since 2014 more than 40,000 stoves have been built, improving the health of 300,000 people. The Heritage Foundation aims to expand the programme to build 100,000 Chulahs per year, bringing the health and economic benefits of the stoves to millions more disadvantaged women and their families.

Champa, who has helped build 14,000 stoves with her husband, said: “We work together and have been able to purchase a motorcycle and jewellery from the money we have made. Now we are happy as we are able to live in comfort. The ladies always ask about the benefit of the stoves. Since it is placed at a certain height, it does not cause harm to the children, not even toddlers. It’s also safe for women. It prevents the smoke entering their eyes. It also avoids the heat reaching your face. I teach them how to build the stove themselves. It makes us happy that they are also learning to build it and then teaching others.”

Maimunah Mohd Sharif, UN-Habitat Executive Director, said: “The Stove Sisters are an inspiration for every woman and girl! With thanks to the Chulah stoves, 300,000 people in Pakistan have access to improved housing, health and better food. Beyond improving people’s lives and homes, this project is a remarkable example where housing contributes to sustainable consumption and production.”

Leilani Farha, the UN Special Rapporteur on the right to adequate housing, said: “Air quality is an important aspect of the right to adequate housing under international human rights law. Chulah stoves not only address that, but have empowered women in rural Pakistan, providing many with self-confidence, and a sorely needed income stream. This ‘platform’ is elevating the position of women throughout society.”

David Ireland, Director of World Habitat, said: “The system of self-help and momentum that this project has created is remarkable. The Chulah stoves have been a catalyst for simple improvements making a huge difference to some of the poorest people in Pakistan.”

The World Habitat Awards Advisory Group said: “This is a tremendous project, which is changing the kitchen from a dirty place to a clean place. By making women into entrepreneurs it gives status in the family and the wider community. It’s vernacular architecture at its best.”