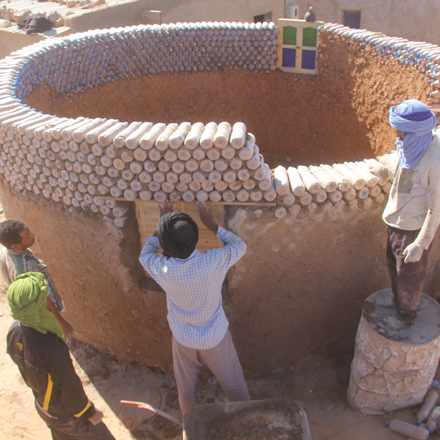 An innovative design using plastic bottles to build homes for refugees in the Algerian desert has been named a Finalist in this year’s World Habitat Awards.

Plastic bottle houses for Sahrawi refugees was initiated by Tateh Lehbib Barika, an engineer born in the Sahrawi refugee camps in Algeria, home to thousands of people displaced by conflict in Western Sahara more than 40 years ago. Growing up he experienced first-hand the harsh conditions endured in the camps, where metal roofing sheets on mud brick houses intensify the searing desert heat and often blow off during frequent sand storms.

After receiving a scholarship from the UNHCR to study renewable energy, Tateh returned to the camps with an innovative idea to improve living conditions for his community, which had been devastated by floods. He built a new home for his grandmother using recycled plastic bottles filled with sand. His idea caught the attention of the local UNHCR office, which helped him secure USD$60,000 funding to build 25 more homes.

This community-led project demonstrated how readily and freely available materials could be used to build better homes, reducing refugees’ reliance on external aid and recycling problematic plastic waste. For 50 vulnerable people, the project has provided a safer, cooler place to live and for the community at large, the skills to continue building.

Albatoul Mohammed, who lives in a plastic bottle house with her husband and son who has special needs, said: “We feel very safe, and the house isn’t affected by the heavy rains or the heat, unlike adobe houses covered with zinc sheets. I’m very proud of this work and the idea that came from a refugee who saw how his people were suffering. It has had a big impact on my life, not only in terms of the building itself but also the use of plastic bottles and waste that can’t be got rid of here in the camps.”

David Ireland, Director of World Habitat, said: “This is an inventive and original idea of reusing plastic bottles from the Sahrawi community to improve their own housing in a hostile environment.”

The World Habitat Awards Advisory Group said: “This is an inspiring story of an individual’s determination and drive, and he has achieved impressive things in his community.”

19 hours ago Dogu claimed his right to land thanks to @ActionAidIndia #WorldHabitatAwards project in #India… https://t.co/k9a9R8RPo9