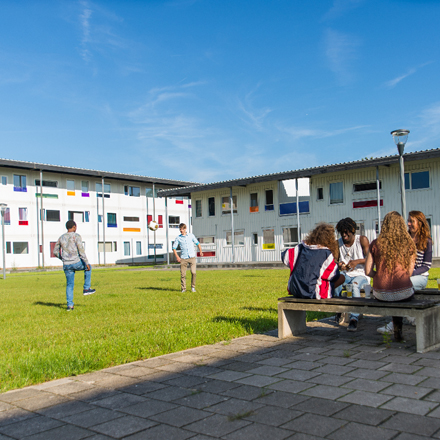 An experimental housing project located on disused land in Amsterdam – which uses old shipping containers as homes for Dutch young people and refugees – has received a Special Mention as a Finalist in this year’s World Habitat Awards.

Startblok – Bringing young people and refugees together through housing was developed by housing associations De Key and Socius Wonen and is home to 565 people aged between 18 and 27. Half of the residents are refugees who have been granted residence permits and the other half are young Dutch citizens in need of affordable housing.

The community is managed by the residents themselves, who are provided with support and counselling and are encouraged to participate in sports teams, language courses and cultural exchanges, which are funded through their rent.

Startblok’s affordable tenancies mean Dutch residents can work or study in an otherwise expensive city, while refugees also benefit from the opportunity to develop friendships and gain knowledge to help rebuild their lives.

The potential to copy this model has been recognised and similar long-term schemes are already in the pipeline.

Adrian, who came to Amsterdam in 2015 as an asylum seeker from Jamaica, said: “When I came here I was scared to talk to people because I’m gay and other persons didn’t understand that. When I first moved here I was kind of reserved and shy because of the same mentality that I had from being in Jamaica – you have to be what society expects of you. Here, they accept me for who I am and that’s the best part about living here.”

David Ireland, Director of World Habitat, said: “Settling refugees into host communities is one of the biggest challenges Western Europe faces, as is the lack of affordable properties in their capital cities. This self-managed project meets those challenges in a way that other countries should explore and emulate.”

The World Habitat Awards Advisory Group said: “This is a city where mass tourism is causing housing issues, specifically for local young people who have no chance whatsoever of finding an affordable tenancy. This project shows that vacant spaces can be used effectively.”