Home / News / Our Blog / We are not invisible

We are not invisible 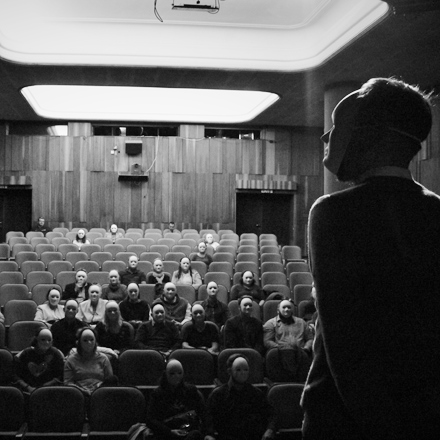 In short, the situation for homeless people in Bratislava is bad. Estimates show 5,000 people are homeless and the majority are living on the street. In Bratislava, there are just three shelters which are only big enough for about 250 people…and that’s all. This means that everyone else is sleeping rough or in unsafe accommodation.

In addition, the number of support services is very small and unable to stop the onslaught of new people ending up on the streets of the city every day. There are no prevention services on one side, and no extra ‘integrative’ services on the other.

The biggest problem we face is – in our country there is no legal definition of homelessness. And if we don’t have a definition of those we are trying to help, we cannot define and provide services for them, as homeless people ‘do not exist’. But as we know very well, there are homeless people here and there’s a lot of them.

So, what should we do?

Our immediate goal is to be heard. The time for backstage discussions and concerted conversations has already passed. This problem and the ‘solutions’ haven’t moved anywhere over the years. So now we will point to homelessness and name it clearly and comprehensibly. The definition of homeless people is long overdue and only then can something positive happen.

The European End Street Homelessness Campaign shows us that the situation for homeless people can be improved and it is possible to finally diminish the plight of people in extreme social exclusion. We have planned a Day of Action tomorrow. During this day several speakers from different organisations will speak, street music will play, and it will culminate in a ‘stopping time’, when we will ‘freeze the square’ in white masks for a minute. It is a symbol of being lost and anonymous. “You do not see us, but we are here among you”.

Joining us will be a strong cluster of diverse supporters. These include the NGO PRIMA, which supports drug users and sex-workers, and Theatre Without Barrier. In addition, there will be a number of smaller companies and other supporters – individuals and community groups – from ‘ordinary’ society. Together we will become an effective tool for communicating, sharing and building new approaches in the future. But from this we are still far away.

And I am concerned that, despite our efforts, the state will ignore us. They do not hear us, and I am afraid they don’t want to hear us – they don’t care about homeless people because they cannot vote!

But this won’t stop us from our Day of Action and we will succeed if we attract the media and if, at the same time, we can get support from other countries. Then the state can no longer ignore us and the thousands of citizens who have no home.

Hope is beautiful. And what I hope follows from tomorrow’s Day of Action is we will be contacted by the Ministry of Labor and Social Affairs of the Slovak Republic. I hope they will ask us to submit relevant documents (e.g. typology of homeless people, rapid rehousing, etc.) from which they will evaluate and approve resources for us to work with.

Also, and this is the global picture, it would be a success for us if we, as a country, begin to treat homeless people with the support they need. In many areas, our country is positively shining, so it is time for us to shine on this issue too. And we must do this because the threat of ‘inspiration’ from how neighbouring Hungary is treating its homeless people is frightening and raises great concerns. In this direction we must never go. We cannot, of course, make someone as an illegal person on the basis of their social status. That’s unacceptable!

We are not invisible!

3 hours ago Enter the 2020 #WorldHabitatAwards - we're looking for projects which demonstrate practical, innovative and sustain… https://t.co/6I3W3Rv7RU

3 hours ago Joan has been in Barcelona for fourteen years and moved flat nineteen times before living at @BordaCoop… https://t.co/9e0HKygW5b