Home / News / Our Blog / Only together will we succeed

Only together will we succeed 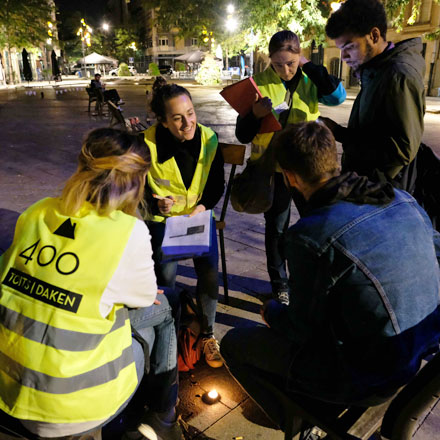 Adrienne Van Vyve, from Infirmiers De Rue in Brussels, discusses the results of their latest Connections Week and their next stage of activity as part of the European End Street Homelessness Campaign.

Homelessness in Brussels has almost doubled in under ten years. As shocking as that is, it’s no wonder when complex political systems hamper decision-making processes and there is a real lack of political will to move from policies which provide temporary emergency aid to preventative measures that work to end homelessness for good.

When the number of people experiencing street homelessness peaked at over 700 in 2016, we said “enough!”, and the 400 Toits-Daken Campaign was born the following year. The name means ‘400 roofs’, and the figure 400 refers to the number of people found sleeping rough in Brussels during the official street count of 2014. It encompasses our mission – to house 400 homeless people in a way so that they won’t end up back on the streets. That’s why we’ve placed Housing First, a methodology which gets people into homes first and then provides support to ensure that they stay there, at the core of what we do.

Almost two years later and we are making some progress. We’ve now carried out our second Connections Week, to get to know each homeless person by name, identify their social and medical needs and to start the process of getting them off the streets and into homes.

Sadly, however, we’ve found that the situation on the streets is deteriorating. Since last year, we’ve seen a 50% increase in the number of homeless people who cannot meet their basic needs. Whilst the majority are still men, dangerous behaviours amongst women – such as prostitution and needle exchange – have almost tripled. Over half of the women we spoke to had spent more than a year on the streets, compared with little over a third one year ago.

So, what does this tell us?

Most importantly, it shows that not only are there more homeless people on the streets but also, they are increasingly vulnerable and lack the support they so urgently need. Our report, detailing the Connections Week results, offers a more in-depth analysis of the figures. The Connections Week also played a big part in awareness raising, the other central component of our campaign. Without the co-ordination and mobilisation of all those who are closely and indirectly involved, including the general public, politicians, private investors, academics, architects, (the list goes on…), we, alone, cannot make the deep-rooted changes needed to end homelessness in Brussels. Only together will we succeed.

The problem of homelessness is not specific to Brussels, or even to Belgium. Unfortunately, most European cities are facing an increase in the number of homeless people. That’s why 400 Toits-Daken is part of a wider movement, the European End Street Homelessness Campaign, as well as A Place to Call Home led by the Institute of Global Homelessness. Being part of the European campaign means working together with other cities on a shared vision, learning from their expertise and experiences, and sharing imagined and concrete solutions to advance the fight for ending homelessness in all our cities.

We are convinced that ending homelessness cannot be achieved without a change of mentality. Just going out onto the street to help is just not enough. This change of mentality must take place simultaneously amongst the general public and those with the power to make changes at different levels: local, regional, national, European and global. For this reason, we must come together across borders to make homelessness a thing of the past…forever!