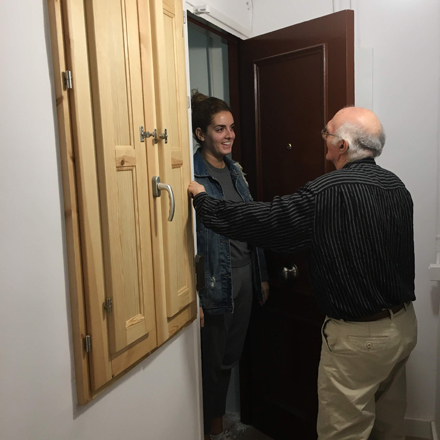 I met Juan Carlos and Salvador in their flat, tucked away high above the busy, winding streets of Barcelona’s gothic quarter. We talked about why this home was so important to them. They told me how they had been forced to sleep on the streets when they found themselves alone after family members had died, and about the squalid conditions of the rooms that they did manage to find – crawling with rats and cockroaches.

Now, their home is warm and inviting. At 70 and 80 years old, they still live independent lives, but with the comfort of knowing that support is there for them when they need it.

Juan Carlos told me about his daily routine – an early morning walk to collect the paper and then back to the flat. A social worker visits to make sure he’s taken all his medicine and has everything he needs. He’s a bookworm and proudly shows me his collection from which he reads after breakfast, before heading down to the day centre for some socialising and food.

Everyone has the right to a home, but sadly for many in Barcelona, this is not the reality. Thousands of people across the city experience homelessness in one form or another – sleeping on the streets or in insecure, temporary accommodation. So, in such a vibrant, wealthy city why are so many people living so precariously?

A decade ago, the financial crash hit Spain hard, bursting the housing bubble and bringing with it rising unemployment and an increasing inability to pay rent and mortgages. Today, house prices are going up once again, especially in Barcelona. Booming tourism continues to push prices up and residents out, with over 10% of private rented housing destined for short-term use.  Particularly in central areas where this stock is concentrated, locals can no longer afford to live in their city – Juan Carlos and Salvador’s neighbourhood has lost nearly half its population to tourists since 2007.

An estimated 230,000 social housing properties are needed in Catalonia to reach European average standards. At the same time 450,000 homes lie empty across the region. The solution, therefore, may seem simple. Unfortunately, it’s not. For a start, there’s huge discrimination in the private rental sector. Charities working with refugees have been turned away from properties. Similarly, vulnerable people with physical and mental health issues, elderly people and those struggling with addiction problems, have found themselves unable to access safe and secure homes.

Habitat3 are working in this extremely challenging context to make sure that every single person ‘enjoy[s] decent and adequate housing’, as stipulated as a right in the Spanish Constitution. Through their programme, Viviendas para las Entidades Sociales, this non-profit organisation finds empty properties to renovate and rent to different charities across Barcelona. Whilst Habitat3 manages the flats, the charities provide ongoing support to residents in line with their area of expertise, including mental health, drug addiction, disability, gender violence and migration. They outsource all the renovation work to social enterprises that train and work with vulnerable people, helping them build skills for future employment. In this way, they’re using partnerships to provide both housing and job opportunities for the most vulnerable groups.

Juan Carlos and Salvador only live in their flat today because of Habitat3. They’re not alone in their struggle, but their stories are proof that there is a solution and that this work is incredibly transformative to people’s lives. The organisation is also partnering with a number of different municipalities in Catalonia to spread their model and make sure that the most vulnerable people across the region all have access to a safe home. As a World Habitat Gold Award Winner 2019, a global spotlight will be shining on Habitat3 this year, creating the opportunity for the organisation to inspire other cities with similar challenges to take a similar approach and start tackling these issues, which are not unique to Barcelona. As Leilani Farha, UN Special Rapporteur on the right to housing, puts it:

“So many housing conversations in cities across the globe centre on the irony of increasing numbers of vacant buildings, while homelessness and housing precarity worsens. This project is the kind of example that I hope other organisations and local governments look to in designing their own strategies for the right to housing.”

And that’s what we’ll be doing because the Award is just the start of a process. Through our knowledge exchange programme we’ll be showcasing Habitat3’s fantastic work and getting their ideas and approach to where they’re needed most. I met lots of Habitat3 residents during my time in Barcelona. When asked how their lives had changed since moving into their new property, the words I heard again and again were ‘peace’ and ‘tranquility’. Because ultimately this isn’t about creating miracles, it’s about securing a basic human right to a safe place to call home. 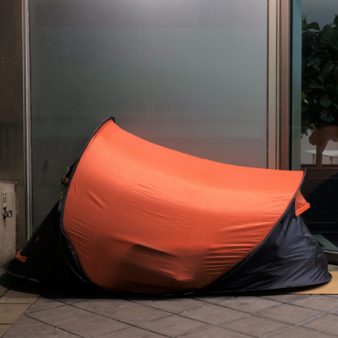 A good place to start

18 hours ago Enter the 2020 #WorldHabitatAwards - we're looking for projects which demonstrate practical, innovative and sustain… https://t.co/6I3W3Rv7RU

19 hours ago Joan has been in Barcelona for fourteen years and moved flat nineteen times before living at @BordaCoop… https://t.co/9e0HKygW5b