Home / News / Our Blog / Another sprig of hope for California farmworkers

Another sprig of hope for California farmworkers 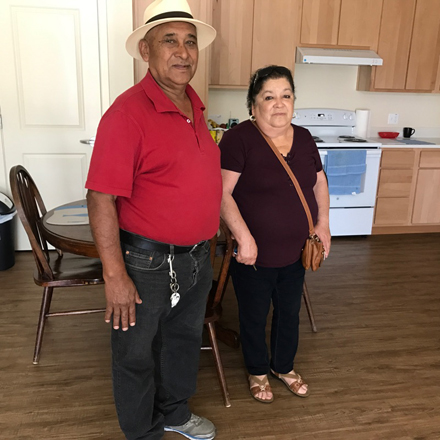 Under the cobalt blue sky in the heat of the growing season, Mutual Housing California welcomed 39 more farmworker families into a community where their labour will be honoured in one of the most practicable fashions imaginable – affordable rent.

The June 13 ceremony took place in Woodland, a town of 60,000 in California’s upper Central Valley which is the heart of the state’s agricultural breadbasket – a region that annually produces more than $50 billion in food and fiber. But it’s also a region where farmworkers have been subjected to historic abuses – wage theft, life-threatening working conditions and inadequate housing.

With state, federal, and local dignitaries among nearly 100 guests, the ceremony marked the opening of the second phase of the Mutual Housing at Spring Lake development, one that built on the successes of the first phase opened four years ago by the non-profit affordable housing developer that earned it international recognition with the 2017 World Habitat Award.

Mutual Housing California, based in the nearby California capital of Sacramento, won the award not only for constructing apartments and town homes that low-wage agricultural employees could afford on their meagre incomes, but also for equipping the community with a solar-powered design that established it as the first ‘zero-net energy’ multifamily development in the United States.

‘Zero-net’ means that the first phase of Mutual Housing at Spring Lake was designed to produce as much energy as its residents were expected to consume.  The second phase has taken a step further, with a ‘positive-net energy’ system – one that will produce even more energy than the residents are expected to consume. The excess will return to the state’s electronic grid system, while the low-income residents enjoy huge cost savings in their energy bills as well as their rents.

Some of the 39 families welcomed into the second phase, as well as those who live in the first phase’s 62 homes, have worked in the fields of the Central Valley and elsewhere for decades, under a semi-feudal system that has long marked the relationship between some segments of California’s grower community and the Central Valley workforce.  This seven-million-acre region produces more than half of all the fruits, nuts and vegetables in the United States.

At least now, for these 101 families in Mutual Housing at Spring Lake, some farmworkers can live a little easier in their later years, or continue to pick and package crops knowing that they’ll have a decent home waiting for them at the end of their day, and at rent that will never take up more than around one-third (30 percent) of their income.

“Somos mas tranquilos – we are calmer,” one of the new residents, Jose Guzman, said in the weeks before the official welcoming ceremony. “We just want to rest and enjoy our home,” he said.

Jose and other farmworker residents spoke at the welcoming ceremony, as did representatives from the United States Department of Agriculture, the City of Woodland, the banks that provided construction loans and syndicated the low-income housing tax credits to help finance the development, and several representatives from Mutual Housing California.

Mutual Housing CEO Roberto Jiménez remarked that housing demand is extremely high in Woodland, especially among farmworkers who are mostly Latino immigrants and whose work in the rural outback separates them from full participation in society. “Access to education is limited, access to public health is limited. Access to food is actually limited: farmworkers suffer hunger at higher rates typically than the general population. So what we try to do is build community-based housing where families have access to all the resources that the rest of us have access to.”

New resident Baudelia Brambila identified one of those key resources: each other. “Arriving at Spring Lake was like a new beginning for us,” she told the gathering. “Now we have friendships with our neighbours, and we know people around us that make us feel safe and in peace. We can rely on our neighbours like friends when there is a need, and more than anything, we’re all agricultural workers.”

In California, more than 77,000 farms and ranches employ an estimated 800,000 farmworkers at the peak harvest season of July and August. The employees are crucial to bringing in the products, yet farmworkers in the Yolo County area where Mutual Housing at Spring Lake was built, earn an average of only $12 an hour for their work. Many of them resort to living in the fields, or in cramped, substandard apartments with multiple families under one roof. Some sleep in their cars or rented trailers along the side of the road, or in migrant labour camps that close down for six months out of the year and are ill-equipped to accommodate an increasingly permanent work force.

Amid the ongoing agricultural worker housing crisis, Mutual Housing California has been able to provide only a small number of homes and apartments that this largest of the American states needs to house this long-neglected and exploited segment of the population. California lawmakers, in their current legislative session, have put forth some measures to try and alleviate the problem, if only slightly. One bill would allow growers to set aside a portion of their land for affordable housing developers, such as Mutual Housing California, to build homes for the agricultural labour force. Another would create a $25 million fund for farmworker housing construction.

The outcome of the legislation remains far from certain, but as the growing season moves into days where 100-degree (F) temperatures can be a daily occurrence, these 101 farmworker families will at least be able to enjoy the air conditioning to cool down. And it won’t cost them or the planet!